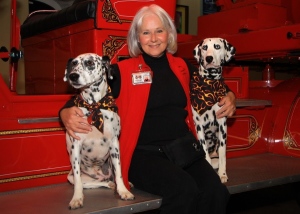 Mary Ellen Mack, 39, was researching getting a new Dalmatian after her beloved Buster Babe died, when she learned that the Dalmatian Club of America demands that breeders put down deaf pups. According to the DCA website, deaf Dalmatians are unsuitable as pets because they are “difficult to control” and “often become snappish and overly aggressive.” Even shelters are advised “not to place the deaf Dalmatian puppies and adults that come in,” but to euthanize them and “concentrate on finding homes for the healthy, hearing dogs.”

Mary Ellen had never thought about getting a deaf dog. She hadn’t known that deafness is prevalent in Dalmatians, with 30-percent of the breed unable to hear in one or both ears. Ironically, it was reading the DCA’s warnings against raising a deaf Dalmatian that inspired her to rescue one.

“Some of the breeders yelled at me for wanting a deaf dog, and some were polite,” she said. “But they all told me they followed DCA guidelines and put deaf pups down.”

Finally, Mary Ellen found a breeder a few miles away from her home in Otego, New York, who promised to give her a deaf puppy if there was one in the next litter. When the puppies were born, she called Mary Ellen to say she suspected that two were deaf, though she wouldn’t know for sure until they were four weeks old. Mary Ellen agreed to take them both. But a month later, her calls went unanswered. The breeder eventually left a message saying: “I had a deaf boy, but I searched my soul and had him put down.”

Mary Ellen’s anger fueled her determination. She found a posting on Craigslist in Georgia by a breeder looking for a home for a 10-week-old pup. Mary Ellen told the breeder she would take it if she could find a way to transport it to New York. Through a series of online connections, she found Cathy Miller Saye, who rescues deaf dogs in the Atlanta area. Cathy picked the puppy up from the breeder, and put him on a plane to New York.

“Pirate is my first deaf dog, and he certainly won’t be my last,” Mary Ellen wrote on the Deaf Dogs Rock website, a resource for adopting and training deaf dogs, after bringing Pirate home in 2006. Since then she has adopted two more deaf Dalmatians, and also has three hearing dogs. Not only has she found the warnings on the DCA website to be unwarranted, but she said, “Deaf dogs are smarter than hearing dogs because they have to pay more attention to you; they are more in tune with you.”

Changes in the Dalmatian Community

Ariel O’Brien, a dog trainer and evaluator for The American Kennel Club and Therapy Dog International, founded Spotted Dog Dalmatian Rescue in August 2011 to give breeders an alternative to euthanizing deaf puppies. So far she has rescued 10 deaf Dalmatians. She kept a pup named Apple, and has placed the rest in homes.

Ariel said many younger breeders are against the DCA policy, and increasingly veterinarians are unwilling to put down perfectly healthy dogs just because they are deaf. She is encouraged to see changes in the Dalmatian community. Several weeks ago, a regional Dalmatian club invited her to give a presentation on training deaf dogs, and recently a breeder promised, “I won’t put my deaf puppies down. I’ll send them to you.”

Meg Ispas-Hennessey, President of the DCA, said she favors euthanization because she is concerned that owners of deaf Dalmatians will abuse them out of frustration. “I will not place a dog with a family that can’t be trained by normal methods,” she said in a telephone interview.

Just as a particular breed is not for everyone—Dalmatians, for instance, require a lot of attention and exercise—some people may find it difficult to adjust to communicating with a dog using hand signals. But it came naturally to Patricia Belt, 60, whose son brought her a deaf Dalmatian pup he found off the Interstate when driving to her home in West Tennessee. “It was almost like it was meant to be,” she said.

When Patricia, a former registered nurse, saw how smart Lottie Dot was and how people responded to her loving nature, she was inspired to train her as a therapy dog. She went on to adopt Dora, a deaf Dalmatian given up by a breeder, and founded Tennessee Safety Spotters, a non-profit using her dogs in educational and therapeutic programs. Last year, Dora passed away from liver disease, and now Izzy, a deaf Dalmatian found on the streets of Texas, carries on with her work.

Patricia explained how the dogs demonstrate dialing 9-1-1 on a model phone and show elementary school children how to “stop, drop, and roll” in case of fire. In anti-litter campaigns Lottie picks up paper off the floor and passes it to Izzy, who throws it in the trash. The dogs place their paws on the pages of a book, and children with learning difficulties practice reading, knowing the dogs won’t laugh at them when they make a mistake. Patients at the Veterans Hospital throw balls to the dogs as part of their physical therapy. Young cancer patients at St. Jude’s Hospital wake up from their surgeries to find the dogs at their bedside. A six-year-old boy spoke for the fist time in a week when Patricia brought her dogs into his hospital room.

Patricia has told the DCA about her dogs, but no longer tries to get them to change their position. She said she realizes the best thing she can do is set an example, being “a trailblazer for deaf dogs” and showing the world that they can do everything except hear.

“I look at them and think, how did I get to be so lucky?” she said.